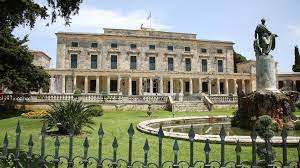 Corfu Museum of Asian Art was founded in 1928 as the Museum of Sino-Japanese Art, following the donation of Gregorios Manos’ Sino-Japanese collection to the Greek state. It includes a great collection of 1,200 Japanese woodcuts, purchased by Gregory Manos at art auctions in Paris and Vienna in the late 19th and early 20th centuries. These are works of Japanese art by term Ukiyo-e, or  “pictures of the floating world” of the greatest creators of the 17th-19th century, such as Harunobu, Hokusai, Utamaro, Hiroshige etc. Their main themes included Chinese myths, early Samurai myths, everyday city life scenes, as well as portraits of geishas and couples.

The collection includes engravings of different techniques such as monochrome (sumizuri-e), early color (benizuri-e), as well as colorful engravings (nishiki-e).